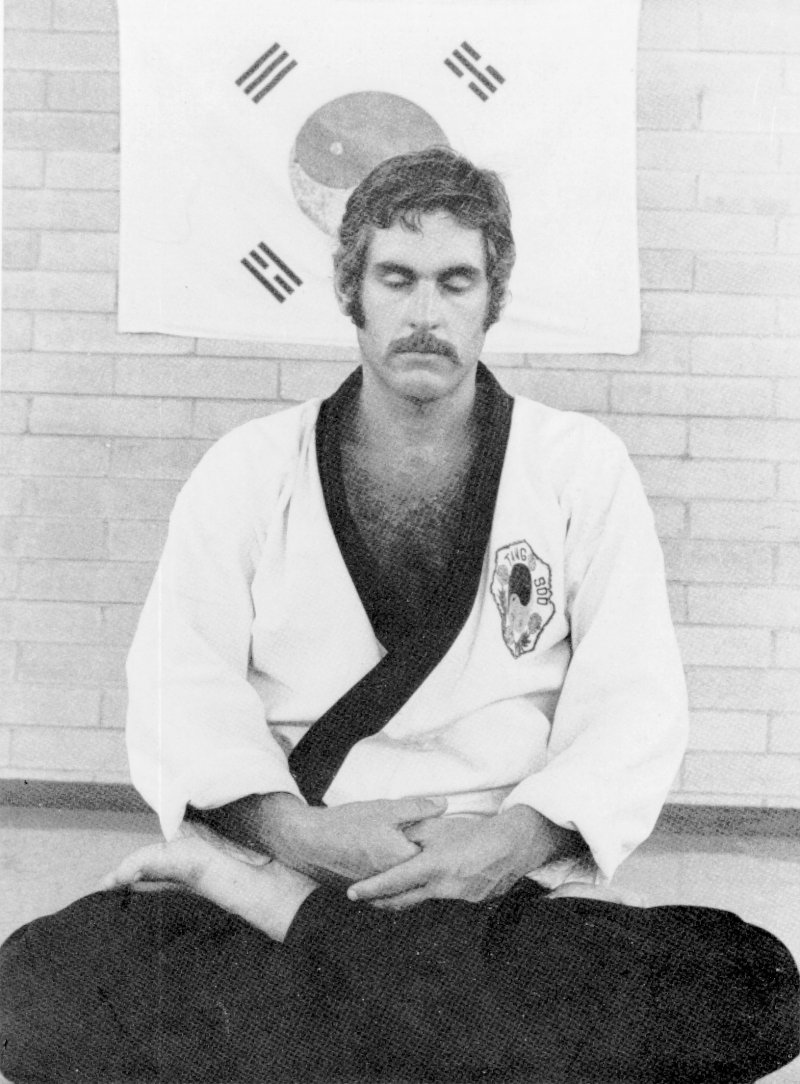 then ∼ now
“Tang Soo Tao is the scientific use of the body, mind and spirit in methods of self defence. It is an art tested and tempered on the lawns of Buddhist monasteries against the steel of wandering bandits and on the field of combat and its history is a long and honourable one. The mastery of its secrets cannot be bought at any price other than serious and rigorous training”.
“Master Robert Caputo“
Master Robert Caputo began his martial arts training at the age of 10, first training in Judo.

At the age fifteen he began studying Wado-Ryu karate and in 1968 he joined the Korean art, Tang Soo Do.

A year later, he travelled to Japan to meet with Master Gogen Yamaguchi, the head of the Goju Karate Association.  He trained in Goju as well as Aikido under Tohei-Sensei and after four months, returned to Korea. For another six months he continued his training in Tang Soo Do and began another art form called Ship Pal Ki “18 methods of defence” in the mountain temples around Seoul.

In late 1972, Master Caputo visited Hong Kong to learn about Nei Gong and Chinese alchemy.  He then travelled to Thailand to observe the local kickboxing art, as well as Buddhism and mediation. In early 1973, Master Caputo travelled to Malaysia to examine the indigenous art form Pencak Silat before moving on to Singapore to further his study of Nei Gong.  Following his time in Singapore he continued on to Indonesia.

As fate would have, in a remarkable story too long to tell here and after a treacherous voyage from Indonesia in a small boat, Master Caputo literally washed up on the shores of Darwin, Australia.

After recovering from injuries and coral poisoning sustained on the voyage he started his first martial arts school in Darwin in March 1974.

Throughout the mid to late 1970s, Master Caputo returned to Korea regularly, training and studying Acupuncture and oriental medicine.

In 1976 at Chenrezig Institute for Wisdom Culture in Queensland he met the Buddhist Lama Ven. Zasep Tulku Rinpoche and in 1978, he travelled to India to study spiritualism and Tibetan Buddhism.

It was after a historic meeting with H.H. Dalai Lama, that Master Caputo was introduced to and took teaching from a number of high lama’s including H.H. Ling Rinpoche and H.H. Trijang Rinpoche, the senior and junior tutor’s to the Dalai Lama.

It was in India that he completed a number of long retreats.

According to Master Caputo’s book “The Living Buddha in Martial Virtue” these meetings and teachings finally answered all his questions. It had been his quest to rediscover the link between physical martial arts and spiritualism in the way that was conceived by warrior Buddhist monk Bodhidharma 1,500 years earlier and he had succeeded.

Sadly, Master Caputo died in a car accident in 1985.

We practice in his honour.